A Classic Night For Dirk Nowitzki

Game 1 of the Western Conference Finals, a.k.a. The Dirk Show.

2: Dirk Nowitzki knocks down a jumper off of a Jason Kidd feed.

4: Nowitzki drives into the lane to draw a contact foul on Kendrick Perkins. He drains both free throws

6: after Russell Westbrook misses a jumper (one of many in a horrid night for the brash young point guard) Kidd pushes the ball and Dirk drives into the lane untouched for another deuce.

8: Dirk pulls up over Serge Ibaka for an easy deuce

10: after Kevin Durant drains a three, Dirk abuses Ibaka (it happened a lot last night) and buries a 17 footer.

12: Peja Stojakavic finds a cutting Dirk who rolls it in.

14: Dirk lures Ibaka with one of his many pump fakes and draws a shooting foul. Hits both free throws.

16: Nowitzki shakes Ibaka a drains a 18 footer. (And yes he’s still perfect if you were wondering.

19: in the midst of a crippling 13-0 run late in the second quarter, Dirk drives the lane bounces off of Ibaka drawing the foul and one.

(Side note: 5 years ago when Dirk went off for 51 against Phoenix he turned Boris Diaw into a crash test dummy. I immediately thought of this while watch the 6-10 super athletic Ibaka just get mauled by the bigger, stronger and more cunning Nowitzki. What I really remember was how me and my buddies made the joke that Boris Diaw in French meant Dirk Nowitzki’s B****. Insert Ibaka’s name and Swahili for the same effect.) 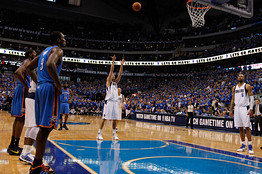 OKC got tired of seeing this last night.

As the second half began Scott Brooks decides to give other guys a crack at guarding Dirk like Thabo Sefolosha and James Harden… what do you think happened?

24: Dirk gets a freebie from an illegal defense.

26: Dirk draws two consecutive fouls on Kevin Durant, one was suspect, but the even better question is why is Durant covering Dirk in the first place?

31: Dirk in the low block, over Sefolosha, no chance.

33: Dirk in the low block, over Sefolosha, no chance.

(At this point it’s becoming clear that not a single living being is going to stop, contain, slow down or… anything Dirk. If you face him up he’ll drive by you or shoot over you. If he has his back to the basket then he’ll pound you down. The Thunder had no answer for Dirk at all.

Coincidentally neither did Dallas for Durant. Loss in Dirk’s classic performance was Durant who was carrying the Thunder while Westbrook couldn’t hit Cowboys Stadium and Perkins couldn’t stay on the floor. Watch Durant and Nowitzki go at it offensively was like watching a clinic. Both knew their spacing, both knew when to drive and when to shoot and neither could be stopped. If game one was any indication of how this series is going to go then it’s going to be a good one.)

36: Sefolosha goes for the fake, again, Dirk hits both.

38: Sefolosha can’t handle Dirk’s size and is called for clutching and grabbing. Dirk hits both.

(At this rate Scott Brooks needed a hug.)

Dirk misses his first shot of the game, and Jesus wept.

After three: 38 points. Perfect from the line and half of the Thunder wondering how in the hell they are going to stop him.

40: James Harden falls for the head fake, Dirk hits both. At this point the Thunder should’ve just stopped jumping.

You wanna try stopping me? Bring It!

We interrupt this Dirk Nowitzki report to bring you breaking news… Jose Juan Barea is pretty much the nastiest player in this series not named Dirk Nowitzki.

When he entered the game the whole dynamic changed. It wasn’t just about trying to stop Dirk, now you had to worry about a 6 foot locomotive that moved in fifth for practically his entire time on the court.

I couldn’t tell you how many times that Barea drove past Thunder defenders for an easy layup. He killed Eric Maynor, entered the lane at will and killed Nate Robinson’s ankles on his last layup.  It’s like someone fills his tank with nitrous oxide and says let er’ rip before he enters the game.

No wonder Andrew Bynum tried to break his ribs.

After Durant and Ibaka bring the Thunder within 5, the ball just so happened to find its way into Dirk’s hands again.

44: after Westbrook hits a layup, Dirk answers with a 16- footer over Ibaka.

46: after Durant nails a three, Dirk answers with an 18 footer over Ibaka. (Serge Ibaka in Swahili means what again?)

48: with the Thunder clinging to what hope they have left, Westbrook fouls Nowitzki and he hits both.

Not a bad night wouldn’t you say?