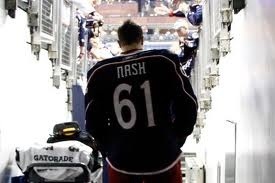 As you recall I wrote a blog last year on why Rick Nash should pull a Carmelo Anthony and force a trade from the Columbus Blue Jackets to a contender.

My reasoning is that Nash, who is one of the most physically skilled players in the NHL is wasting away in Columbus and deserves to play for a team that has a shot at a Stanley Cup every year.

In his now nine year career Nash has been to the playoffs once, a four game sweep at the hands of the Detroit Red Wings. He’s been through rebuilding project after rebuilding project. He’s gone from number one pick, to Maurice Richard trophy winner, to team captain, to possibly becoming just another good player on a crappy team.

This year the Jackets tried to put some pieces around him to make the team respectable. Their additions of Jeff Carter and Steve Wisniewski we’re supposed to add some fire power to their offense and make the Jackets a playoff contender… It’s been a disaster.

Wisniewski has been out for most of the year with either injuries or suspensions and Carter has been a shell of his former self. The Jackets are last in the NHL looking at another number one pick and another rebuilding process… and it looks like Nash wants no part of it.

What started as rumors is looking like a reality. Nash gave the Jackets a list of teams he would wave his no trade clause to play for if they were going to trade him. That’s the most polite trade demand ever.

He’s had enough, enough rebuilding, enough losing, enough mediocrity. He’ll be 28 in June and doesn’t want to spend the rest if his 8 year contract rebuilding again.

You can tell that this whole process is finally starting to take its toll on him. Nash is on pace for his worst statistical season in his career and at times has looked non-existent on the ice. He needs a fresh start and a chance to succeed and he needs it now.

As a fan I’m torn. I love Nash, I think he is one of the game’s best players, I would love to have him in our red, white and blue skating alongside Marian Gaborik and Brad Richards, however the Rangers don’t really need him.

Sure he could play one of John Torterella’s top two lines and make the Rangers the favorite in the Eastern Conference, but do you know what the Rangers would have to give up to get him?

Columbus would need a quality starter, a top prospect and a pick. If it’s the Rangers were talking about Brandon Dubinsky or Artem Anisimov, then a choice of either JT Miller, Tim Erixon or Chris Kreider and a draft pick. From what organization insiders are saying, those three prospects could become serious contributors and possible all-stars…. Now you see the concern.

Trading Dubinsky would be heart breaking, next to Ryan Callahan he personifies this team’s toughness and heart every time he steps on the ice. I’ve watched Dubinsky since the lockout when he first came up and have loved every second he’s been out on the ice whether it’s scoring goals or fighting Alex Ovechkin or Mike Richards. Letting him go would be like losing a brother to be honest.

The way the Rangers are right now works. They’re a tough defensive minded team that can score enough goals to win games with a goalie that only needs one or two to do so. If we trade for Nash then we lose a little bit of that identity for the sake of a few more goals.

So what’s it gonna be, break up the band for one of the game’s best forwards or stay the course and do what’s gotten you to this point?

There are only 7 days before the trade deadline. Rick Nash is available and could put any contender over the top for the right price.

His time in Columbus looks like its finally coming to its merciful end and he will finally have a chance to play meaningful hockey.

His wish list has been notified, prospects are in place and there is anticipation as to where he’ll end up if he actually gets traded.

One of those teams is my Rangers who are having their best season in years. Nash could either put them over the top or cost us our future. What will the Rangers do?

Why Rick Nash Should Pull A Carmelo 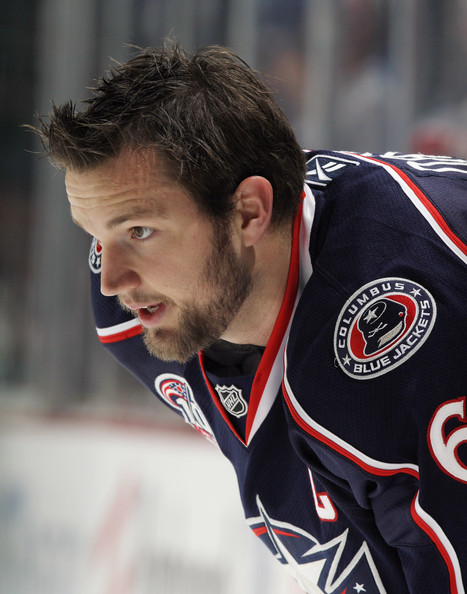 I had a dream last night, a hockey dream… pause.

I was watching the Maple Leafs and Penguins in the Eastern Conference Finals in Toronto with leafs up 3 games to 1. The clock was winding down and the Air Canada center was going crazy as the Maple Leafs were heading to their first Stanley Cup since before I was born.

When the clock hit all zeros the Leafs flooded the ice in celebration with sticks and helmets littering the ice. After pandemonium ceased and the Prince of Wales trophy was being handed out Captain Dion Phaneuf excepted it with a big smile on his face and the camera closes in on the teams assistant captain Rick Nash.

The Toronto native left the doldrums of Columbus and forced a trade to his hometown and brought his team back to glory. He made the Leafs relevant again, he brought on of the league’s greatest franchises back to life.

Then I woke up. Rick Nash was still in Columbus. Steve Mason was still his goalie, shaky as ever. He was going to miss the playoffs… again.

In 8 years in the NHL Nash, one of the games most skilled and talented players, has only made the playoffs once, a sweep at the hands of the Detroit Red Wings. He’s won an Olympic gold medal, led the league in goals and is guaranteed for 35-40 each season. If you watch him play the game you’d be amazed at how a 6-4 220+ pounder can be the perfect combination of power and finesse.

Legitimately he is one of the top 7 forwards in the league. Sure he’s the face of the Blue Jackets and easily the franchises greatest player. However, I cant help but wonder what he would do in a bigger market around better players. 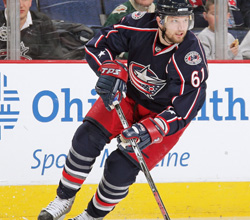 8 seasons and 1 playoff appearance is not good enough for one of the league's best forwards.

He’s literally had no offensive help during his 8 years in Columbus. The defense behind him has been iffy at best and goaltending, well you’ve seen it.

He’s been the be  all end all of the team, if he doesn’t do it then no one will. He’s a more hard luck version of Kevin Garnett. He turns 27 this year and is playing in the prime of his career on a bad team. He needs to get traded.

Rick Nash needs to pull a Carmelo Anthony and he needs to do it now.

A player of his caliber needs to be on a good team at this point of his career. Its clear that Columbus cant put a good enough team around him and they need to start over. Start that by trading Nash to either a contender or a team that’s one player away. It would benefit all sides, the Jackets who could cut some payroll, the team receiving Nash would get one of the games best players and Nash can get the exposure he needs and play for a contender.

Picture Nash in Boston, Los Angeles, Buffalo, San Jose, Montreal or any team where his skills would mesh well with the team chemistry and attitude of the city. He scores 70-75 points a season when guys like Anze Kopitar, Joe Thornton or anyone would bump that total to 90 range. If Nash had a comparable winger he would have won a scoring title or two at this point of his career.

But the team that would make the most sense for him and that team, drum roll please…the Toronto Maple Leafs.

It’s the Carmelo conundrum. He’s from Brampton, Ontario, which is right outside of Toronto so he’s a hometown kid. He would be an automatic hero and the biggest name that they’ve had since Mats Sundin in his prime. Picture the buzz in that once proud hockey city, which is going through one of its worst stretches ever.

If you’re Toronto how would you not trade for him? You’d have Nash, Mikhail Grabovski and Phil Kessel as your front line of Clarke MacArthur leaves and if he doesn’t that’s another piece to play around with.

That front line without Nash has been good enough to get the Leafs back into playoff contention this year. Adding Nash would put them over the top and make them an instant player in the East.

It also makes Toronto relevant again. The Leafs are to the NHL like the Cardinals are to baseball, the Lakers are to basketball and the Cowboys to the NFL. They’re one of the two glamour franchises in their sport. They need to be great, they need to matter.

They haven’t been to the Cup finals since 1966-67, which was their last title. 44 years without a championship for a team that ranks second to the Montreal Canadiens in that category is insane.  The leafs need to get back to that level of play of get back to being a championship team. 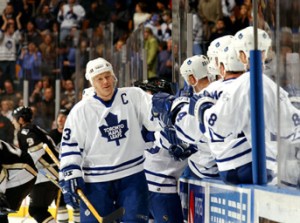 The Leafs need another face of the franchise like Mats Sundin once was. Nash would be perfect.

While they are making strides to get back to that point a big move like trading for Nash would put them back in the discussion of being one of the best in the business.

For Nash it would be the fresh start he needs and the proper stage for a player of his caliber. The Jackets have tried to build around him but they haven’t been able to. It makes no sense to keep paying a franchise player franchise money without the proper team around him. I would love to see Nash in the prime of his career have a chance to win a title and contend for an MVP. Columbus is a nice place to play but if Nash wants to reach his full potential and become greater than just a great player for a small franchise then he needs to either force his way out or have a team make an inquiry for him.

I’m not a Jackets fan but I’m a Rick Nash fan. I want to see him win a title, get the national exposure he deserves and become one of the best in the game. He wont be able to do that in Columbus. I know hockey players are very different from other professional athletes and don’t let their greed show, but this is one scenario that I wouldn’t protest. Hopefully he gets a little Carmelo in him and gets out while he can.