Derek Jeter is now in the twilight of his career.

In my early years of watching baseball I fell in love with a bunch of players. I loved Andre Dawson and his power and defensive skills, I loved Ryne Sandberg because I always wanted to be a middle infielder, and I loved Mark McGwire and his unmatched power at the plate.

However, I’ve never loved a player like I do Derek Jeter.

Ever since his rookie year in 1996 I’ve followed Jeter closely, defended him in silly arguments against haters who downplay his importance to the Yankees. I’ve bought his Jordan brand sneakers, three screen-print jerseys, annoyed every one of my friends by stating his greatness (or overstating it depending on who you ask.).

To say that I’ve been a little obsessed with Jeter is an understatement. Jeter has been the quintessential Yankee. He has five rings, a World Series MVP, he’s made plays that have defied logic, he’s come through with clutch hits so many times that I’ve lost count. When he retires he will be remembered as possibly the greatest Yankee ever. And that day of retirement is slowly approaching.

Jeter is now 37 years old. He is coming off of the worst statistical season of Hall of Fame career. He set career lows in batting average and on-base percentage and had his lowest totals in home runs and RBI since 2003 when he missed the first two months with a separated shoulder. There were times when I remembered watching him at the plate and I said to myself “maybe he should move down in the lineup.” In fact I wrote a blog about it in anger. Yep I was angry at Derek Jeter for the first time in my life.

However, it’s not his fault that he’s no longer a top of the order guy. It’s called age and no one can escape it.

Jeter is at the point of his career where you can’t count on him to come through in the late innings like he did in the early 2000’s. He can’t sprint across the field and flip balls to Jorge Posada, cant range to his left and jump off of his back foot and throw a strike to first base from mid-air; it’s not feasible at this point.

Unfortunately plays like "The Flip" will no longer be feasable for Jeter to perform.

However, his demise in some ways has been greatly exaggerated. Last year after winning his 4th gold glove, critics bashed Jeter’s selection saying that he was unworthy of the award due to his lack of range and how his saber metrics numbers just didn’t add up.

(Ok, listen. People hate Derek Jeter I get it. People have gone to great lengths to downplay his skills in the field whether it is in books on defense or with this saber metrics crap. But saber metrics is the most meaningless mathematical equation in sports. That’s right, more than RPI rating, passer rating and the BCS. Saber metrics is some stupid number that judges a players skill through objective views and people use it as a basis to prove that some players are better than others.

Last year people were saying that Alexei Ramirez deserved the Gold Glove because his saber metrics numbers were better than Jeter’s… Ramirez 20 errors and a .974 fielding percentage… Jeter led the league with the fewest errors (20) and the highest fielding percentage (.989). It’s like going car shopping; do you want the car loan with the highest interest rate or the lowest one? Exactly. Shut up.)

I understand to the eye that Jeter isn’t as good in the field as he was 10 years ago, but he’s not a liability like Manny Ramirez. He’s still a very capable shortstop and is able to make plays when they are needed.

What does scare me is that this year his regression could coincide with the simultaneous regression of Alex Rodriguez and that could spell trouble if the Yankees have two DH’s playing on the left side of the infield and Jorge Posada is already occupying that spot as we speak.

The fact is that Jeter isn’t the only player at a crossroads in an organization that is at one collectively. This Yankees team is by far the weakest one in years. There are questions about Jeter, A-Rod, the pitching, the youth, who’s going to hit, who’s on their way out and what’s next for the Yankees after this year?

Deals that need to get done, and soon, are for Robinson Cano and Nick Swisher. Jorge Posada is on his way to retirement and Jesus Montero is waiting in the wings to take his place. The Yankees farm system is one of the best in the Majors and Brian Cashman and company are wondering whether or not to let em rip, or keep spending money on free agents.

Jeter is essentially the least of the Yankees worries. However, he still represents a large part of this team.

He is still the face of the Yankees. He is 76 hits away from becoming the only Yankee to have 3,000 hits during his life time with the team. He is on the verge of owning 5 more Yankee records during the next 3-4 years in New York. He is still the main attraction of the team even in his final years.

That’s why this fall’s contract negotiation mess was so disheartening for all that were involved. Jeter was asking for too much money even with all of the possible approaching accolades and the Yankees front office let the talks drag on and become public. It left a sour taste in Jeter’s mouth as it did with the fans and the front office.

It made me wonder how the most famous player, and arguably the game’s most important one, could seemingly be undervalued by the team that he brought back to prominence. 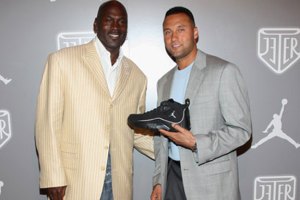 Derek Jeter face has been that of the Yankees and other business ventures off of the field.

A deal did get done but not without more public anguish. How could they spend almost 60 million on a guy that is coming off of his worst season and aint getting younger? Here’s my counter, how did Mike Hampton, Carlos Beltran, Mo Vaughn and Albert Belle get gigantic deals when they never really proved their worth?

Jeter’s deal is for services rendered. He was the best shortstop in the league for years. He led the Yankees to 5 titles; the team has made the playoffs every year that he has been in the league except one. He’s an 11-time all-star, SI sportsman of the year, was one of the game’s most consistent players for over 11 consecutive years. If anyone deserves one last big pay day it’s him.

Am I biased? Of course I am I’m a Yankees fan. I’ve seen five parades in Manhattan; I have countless championship tees and hats since 1996. I’ve spent hours of my life in front of TV living and dying with this team in the last 15 years and it’s been due to their success thanks to Derek Jeter.

Was he as powerful as Miguel Tejada or Alex Rodriguez? No. was he better defensively than Omar Vizquel? No. was he a better hitter than Nomar Garciaparra? No. did he play at a higher level than any of those other guys from that era of shortstops, more consistently and with more success than any of them? Yes.

That’s who Jeter was and is. He’s not intimidating, he’s not going to leave you in awe of his raw talent and skill, but he will outwork you and leave it all on the field when it’s all said and done. That’s why Jeter ran into seats for a foul ball during a May game against the Red Sox, that’s why he became Mr. November versus the Diamondbacks, that’s time and time again in every situation people counted on Jeter to lead the Yankees to victory, and he did it more times than not.

But those days are unfortunately over. As Jeter inches closer to every conceivable Yankee record he also comes closer to the end of his brilliant career.

This Derek Jeter that we’ll see in the next 3-4 years won’t be as great as the one that we’ve seen in the previous 15, but it will be something to watch a guy I grew up with and loved every time I watched him play become possibly the greatest Yankee to ever put on a uniform.

No book on defense, over analysis with saber metrics or criticism from an outsider can ever take that away.