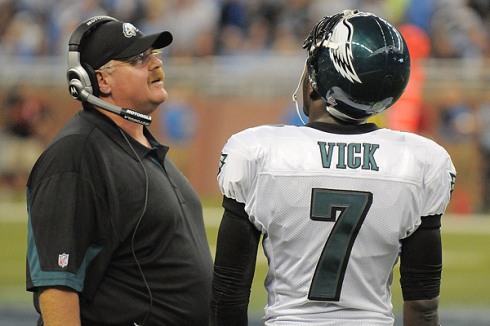 All that stuff I said about Kevin? Scratch that.

So, how’s your quarterback doing? For many of the teams in the National Football League—not so well.

By the end of Monday night’s 49ers-Saints game there are more than 6 controversies and 5 other questions at quarterback. On Sunday we found Kerry Collins, Bruce Gradkowski, and Luke McCown replace turnover prone QB’s, we saw Michael Vick take a strangle hold at the position over an injured Kevin Kolb, and we saw Brett Favre and Derek Anderson stink it up to the point where maybe it should be time for a change in both places (that sound you heard was Matt Leinart snickering in the background). As for Trent Edwards—eh.

In the case for Philadelphia and Vick the situation has led to a knee-jerk reaction by Andy Reid who said on Tuesday that Mike Vick is his starter. Granted he has played well by totaling almost 600 total yards in 6 quarters but he was sacked 6 times by the Lions defense… the Lions. They lost to a Super Bowl contender in Green Bay and still have to play Minnesota’s stout d-line and the Cowboys and Giants. For Reid to make such a quick decision when the plan was to develop Kevin Kolb and contend down the road will come back to haunt him, also IT’S TWO GAMES AND IT’S MICHAEL VICK!!! He’s barely a lifetime 50% passer. You ever taken statistics? You go with past trends over recent numbers because you’ve seen more of the former than the latter. Unfortunately Reid isn’t getting this memo and he’s about to find out the hard way.

For other scenario’s you have to wonder what the ramifications of replacing these quarterbacks will be. Bruce Gradkowski did do an excellent job after Jason Campbell was pulled, however it’s two games and it was the Rams. Now you have Campbell, who probably has lost trust in Cable, looking over his shoulder at a QB who isn’t a starting QB in this league. You’ve got to let him gel with his receivers (who honestly aren’t that good) and gain some trust in him. Then again, it is the Raiders, who love drama more than any other team in the league.

Then there’s Vince Young (speaking of constant drama). Young is on the hot seat, again, after getting run into the ground by the Pittsburgh Steelers defense and committing 3 turnovers and looking just plain bad. So now he’s involved in another carousel with Collins and at this point you have to wonder if maybe the Titans are close to just ending the Vince Young experiment and moving on and into the pool this draft for a new quarterback. The inconsistencies are becoming too much of a theme with Young and its year 5. Young had the job from the jump and aside from a few plays he hasn’t really had any big impact on Tennessee. This weekend at New York could be the breaking point for Vince. If he has another horrendous start and is benched for Collins, that’s it. He’s coming to the end of his rookie deal and with his poor performances popping up again it probably means that the Titans will not shell out another 4 years and X amount of dollars for a quarterback that has never lived up to the hype that he created in the 4th quarter at the Rose Bowl versus USC. 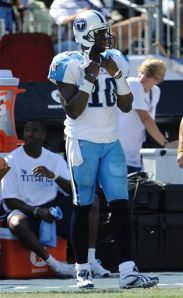 (side note: that 2006 Rose Bowl game, while still one of the greatest in college history, is becoming less and less relevant to the players involved years after it happened. It was a gluttony of overhyped talent that never panned out. Matt Leinart got booted out of Arizona in favor of Derek Anderson, Young has never transformed into the big play quarterback that he was billed as at Texas, Lendale White and Michael Huff are certified bums and Reggie Bush… I’ll spare him; he’s sort of having a bad week.)

So what about the other QB troubles in the league? Here’s my take on all of them:

CONTROVERSY: Ryan Fitzpatrick takes over for Trent Edwards… somewhere in the world J.P. Losman is probably still wondering how he lost his job to Trent Edwards… he aint the only one.

SITUATION: David Garrard over Luke McCown. Garrard will be the starter until the end of the season when the Jags jettison him for either Jake Locker or Mallett.

CONTROVERSY: Jason Campbell vs. Bruce Gradkowski. Yet to be determined if Oakland is smart then they won’t even think about benching Campbell again for a career backup. Campbell was brought in there to be the guy and you can’t bench him twice in three weeks. On the bright side for Campbell its business as usual. Underachieving, looking lost in an offense, getting replaced by a lifetime backup, the usual.

CONTROVERSY: Vick over Kolb. If Andy Reid blows this then he’s getting fired at the end of the season. The Eagles could possibly lose three NFL quality quarterbacks in ten months. That’s got to be a record or something.

SITUATION: Favre… is it really inconceivable to think that Favre could be replaced by Tarvaris Jackson. Favre looks terrible. Two of three picks were absolutely horrendous throws and he has no faith in any receivers other than Visanthe Shaincoe. By the time Sidney Rice does come back from Knee surgery the Vikings might be done. The offense has lost so much mojo that even if they do turn into a heavy run based team they still won’t be an effective passing team which makes Favre useless. Not that he already wasn’t. 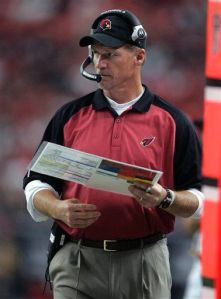 Maybe there was a reason Cleveland let him go.

SITUATION: Derek Anderson with two inexperienced quarterbacks behind him. Going back to Sunday when watching the Cardinals offense I looked at Larry Fitzgerald at one point… he looks mad. Derek Anderson can’t find him and can’t throw a consistent pass. The Cardinals look lost on offense and has no identity. They are trying to keep that same high octane offense going that they had when Kurt Warner was around and its not plausible with a QB who can’t complete more than 52% of his passes. Don’t be surprised if every Cardinals player calls up Dancing With The Stars to vote Kurt Warner off and gets him back to Glendale… or kidnaps Leinart… who they never should’ve let go of in the first place. Good job Ken Whisenhunt.

SITUATION: Jacory Harris or A.J. Highsmith. If Harris has another road stinker like he had against Ohio State, or North Carolina last year, or Virginia Tech last year, then he should stick to creating fashion trends like he did with his overalls and let Highsmith take the reins.