Nashville Has To Keep Weber 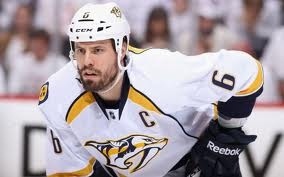 You lose Ryan Suter your second best defenseman and arguably one of the top 5 defenders in the league, you can get over that.

You lose Jordin Tootoo a resident tough guy and fan favorite, that’s ok he’s replaceable. You can get over that.

Losing Shea Weber, your heart and soul, your captain, the man that represents Nashville hockey and is quite possibly the best defenseman on the planet.

Yet that is what the Nashville Predators are facing right now. The Philadelphia Flyers signed Weber to a 14/ $110 million dollar offer sheet in an effort to steal Weber away from the only team he’s ever played for.

The Predators have only five more days to match and the question that’s swirling in my head is why they haven’t already matched it?

You don’t let players like Weber walk away. This isn’t like the Knicks and Jeremy Lin. You can get another guard that does the same things as he does and plug him in easily.

Weber is a different story. He’s one of if not the best defensemen in the NHL. He’s a former Norris trophy winner who will win about three more before his career is done. He’s a natural born leader as captain and with Pekka Rinne leads possibly the best defensive team in the league.

To let him leave would mean to let everything that Nashville built go to waste. Yes they would receive four first round picks, but does that really add up to what you lose in Weber?

Coming into this offseason you knew that Nashville was going to lose either Weber or Suter to free agency due to money. They can survive without Suter, but losing both he and Weber would be too much to overcome.

For Nashville’s sake I hope that they match Weber’s deal no matter the cost.
Weber is the face and leader of their franchise. Losing him would mean missing the playoffs, falling into the lottery of the draft and starting over when you were considered a possible Stanley Cup contender.

Something’s you can get over, losing Weber is most definitely not one of them.