The Summer Of Durant 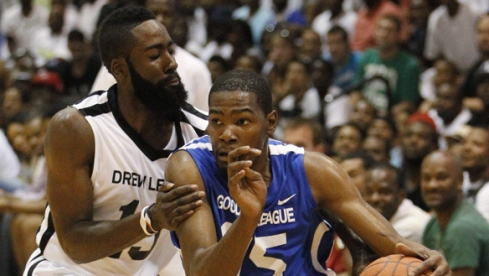 Kevin Durant has welcomed and dispatched all challengers this summer.

So, what have you done this summer? Gone on vacation? Went to a few shows? Drank a few beers and partied? Yeah sounds like a normal summer where everyone is happy that the winter coats are away and the only thing that matters are warm vacations on beaches and being lazy as hell.

Kevin Durant could’ve spent his summer doing the exact same thing as all of his, instead he’s been too busy becoming the new face of the NBA and quite possibly the most popular, and best basketball player on the planet.

Durant’s summer has been a constant highlight reel that has showed him dropping threes by the bucket, dunking from every possible angle and drawing more ooh’s and aah’s than the circus.

Durant has been the man of the summer in any sport. His acrobatics and mind-numbing performances have overshadowed the bleak outlook of the NBA lockout, the MLB playoff races and any other headline that has graced ESPN.

It’s been silly to be honest with you. First there was the 66 that he dropped at Rucker Park earlier in the month where a pull up three for a heat check turned into a YouTube phenomenon. Durant made the crowd erupt with every pull up bomb to the point where fans rushed the court after he hit a fourth consecutive three. Even the on court announcer lost his marbles as Durant stood and posed with the mob of fans with nothing but a screw face signifying “yeah, I’m nice.” 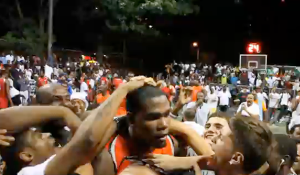 they'll be talking about the Rucker game for a long time

He’s put on shows at Dyckman park, toured China and the Philippines, balled out in gymnasiums all around the country and this past weekend in a matchup of D.C. and L.A. ballers it was Durant’s star that shined the brightest with 44 points in a win for his D.C. area Goodman League team over the L.A. based Drew League squad (led by OKC Thunder teammate James Harden coincidentally). It was a game that had a ton of hype coming into it thanks to Durant’s presence and that of John Wall, DeMarcus Cousins and other ballers who came out. While everyone came to play it was Durant that controlled the action most and made the crowd of over 1500 stand in awe.

Not bad for a 22 year-old who’s coming off of his first conference finals appearance this year.

What I like most about this entire turn of events is how eager Durant is to go out there and show just how dominant of a player he is. There were times in the Dallas series where teammate Russell Westbrook stood in his way and wanted to take all of the big shots while Durant stood back helpless.

In these situations it’s just Durant and his opponent. He has the respect of his teammates at the Rucker, Goodman or any other spot so when he gets the ball they just clear out and let him do him. It’s done wonders for his game and his brand.

Whenever the NBA starts up its next season how can the league not make Durant its most focal piece? He’s always been known as a genuine guy with a quiet demeanor and a big heart, but now it looks like his game is reaching new heights.

With LeBron James’ hara kiri of his personal appearance to others in the league Durant is the perfect fit to replace him as the face of the league. Kids, adults, college ballers and the streets adore Durant from coast to coast. He cares about his image to the point that he puts his tattoos on one unseen area of his body so that he won’t mess up any marketing for himself, however he’s nowhere near as vein as James.

Durant is always active on Twitter and is eager to communicate with fans at all times. He always showcases other people on his page and is not afraid to let his guard down for a little bit of fun.

What really separates him from LeBron is that he wants to improve… and wants to fight for his respect. That’s the main reason why Durant is in Harlem, D.C., and L.A. balling on the courts against great pro and street ballers, he wants respect from all forms of the game and not just the league.

Going back to the Rucker Park game just look at his facial expressions. Look at how with every shot he takes and makes he slaps fives with fans, chest bumps rappers and plays with a killer mentality. He’s honing himself for the next time he takes the court and he’s staring Carmelo, LeBron or Kobe in the face and the game is in his hands. While LeBron finally tries to find a low post game in year 9 and is still searching for his killer instinct, Durant is getting his as we speak. 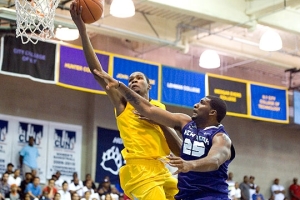 (Side note: if you think Kobe doesn’t recognize Durant balling extra hard then you’re a fool. Why else would Kobe be at a Drew league game balling in a gym with 5 rings? Because Kobe competes, he sees Durant doing his thing, he saw the 66 in Harlem and thought to himself “I have to get out here and see what’s up.” He knows Durant is trying to position himself for the crown and Kobe still wants to match Jordan and isn’t satisfied himself just yet. Kobe didn’t ball in D.C. for the Drew-Goodman game, he didn’t have to. He proved his point already that he’s still around and he can still bring.

You know I used to really hate Kobe, but the older he gets I love him more and more.)

The question now is what happens when the summer ends and NBA players are heading overseas to make money during the lockout? Where will Durant go and what will he do?

Is Turkey an option, Russia? He’s rumored to be staring in a movie about basketball that will start shooting when NBA training camp would start. Durant’s stock is higher than any other player in the league right now. Everyone wants to know his moves, his thoughts and everything that has anything to do with him right now.

And he has this summer to thank for it all. His games at Rucker Park, Trinity, Dyckman and everywhere else that he has played in the last month and a half have dropped our jaws and made us look at him in a different light.

He’s scored a lot of points, wowed a lot crowds and has made himself the number one player to watch in the league whenever it starts up again. Kevin Durant has moved up the NBA’s pecking order and it doesn’t look like he’ll be coming down for awhile.

I think his summer turned out just fine.