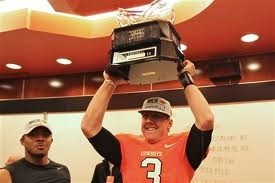 Five years ago I watched the number two team in the country, my Michigan Wolverines, lose one of the best 1 VS. 2 matchups of my lifetime to Ohio State. The 42-39 thriller had so much hype due to the fact that nor only was it #1 against #2, but also it was the fact that it was the biggest rivalry in college football.

The game was incredible. It was a seesaw battle where if one team made a mistake you knew they were screwed. That mistake belonged to Michigan as OSU held on for the victory and a shot in the title game.

OSU was the only undefeated team in the nation with USC, Florida and Michigan as the best one loss teams behind them. I thought Michigan should’ve been OSU’s opponent because the game was so closely played and because they were #1 & #2 all year long. OSU and Michigan were the best two teams in the nation and they proved it on the field. A rematch would’ve been fitting because Michigan would’ve gotten to avenge it’s only loss of the season, and because… Well… I’m a Michigan fan.

The logic was there. However, Michigan didn’t win the Big Ten. The end result? Florida played OSU and we haven’t seen a non SEC BCS Champ since. I was pretty salty because I always thought that Michigan should’ve played in that game despite the result. I thought that not winning it’s own conference shouldn’t have played a factor into the game.

5 years later the BCS suddenly has had a change of heart and it’s ticked me off to no end.

After watching last nights announcement of the BCS national title, which is a rematch of a sloppy 9-6 affair between LSU and Alabama I’ve had enough of the BCS.

I understand that the SEC is the see all end all of college football in most people’s eyes, but to give Alabama a rematch against LSU when Oklahoma State was more deserving is an insult to college football.

Bama and Oklahoma State were the viable options to face LSU in the title game as each team had one loss on it’s resume (so did Stanford but they didn’t win their conference… Wait a minute…) Bana lost a game they should’ve won to LSU, as did Oklahoma State to Iowa State only one day after the tragic death of it’s women’s basketball coach.

Oklahoma State beat 7 teams with .500 records or better and 4 in the top 25 including a comeback victory against Texas A&M, an overtime thriller over Kansas State (more on this later) and a royal beat down of preseason #1 Oklahoma.

Alabama beat an overrated Penn State, an offensively challenged Auburn, and Arkansas without it’s best defensive lineman. They played a weak schedule in a down year for the SEC and got the benefit of the doubt because of it’s conference affiliation.

Some say Oklahoma State should’ve won all of their games and this wouldn’t be an issue… well shouldn’t you say the same for Alabama?

Why does Alabama get a rematch when they lost their shot earlier in the season? Alabama had LSU on it’s home turf and lost in a turnover filled game where defensive brilliance over shadowed both teams offensive ineptitude. If you’re saying that Oklahoma State blew their chance in Iowa City well didn’t Alabama blow theirs at home?

Also remember this quote… “if you don’t win your conference championship then you have no business playing for the national championship.” That was Nick Saban in 2003 after Oklahoma was announced as the opponent for his LSU Tigers after losing their conference title game. So why not hold Saban to his word?

Here’s a few reasons why the BCS won’t: 1, the system to award the title game and BCS games is a joke. 2, the matchups are predetermined. 3, the notion that every game counts is BS.

Let’s move past the title game for a minute; the only sensical match-ups this year are Oregon-Wisconsin in the Rose Bowl & Stanford-Oklahoma State in the Fiesta Bowl. For the second straight year the Big East gets a team in the BCS with more than 3 losses. West Virginia got crushed by LSU and Syracuse (yup 5-7) and they get the Orange Bowl? Michigan isn’t ranked in the top 10 but they get the Sugar Bowl? Virginia Tech got killed by Clemson by a combined 61-13 in two games and they get a BCS bowl game?

If the BCS is truly about setting up the best matchups in the country then it truly is an epic failure.

#6 Arkansas, #7 Boise, #8 Kansas State & #9 South Carolina are all BCS no shows. If four top ten BCS teams don’t even make BCS bowl games then what is the point of the system?

I understand conference winners gets dibs on these games and that a conference can’t get more than two teams in but four BCS qualifiers are outside of the top ten and two conference winners are below the top 15. Hell WVU is behind, TCU, Houston and Southern Mississippi. How does any of this make sense?

How do you tell K-State after Virginia Techs thrashing that they deserve a BCS game ahead of you when you almost beat the #3 team in the NCAA and had the 10th hardest schedule nationally? How do you tell Boise after losing by one point to last year’s Rose Bowl Champs that Michigan or VA Tech are better than you? What’s the point of playing tough games out of conference when it doesn’t seem to matter?

Even worse if you’re Oklahoma State what’s the point of winning your conference when all you get is the second best team in the PAC-12 instead of playing for the national title?

The only solution for any of this is an abolishment of the bowl system and the creation of a playoff. Put the best teams in the nation up against each other and let them duke it out. It’s the only logical way if deciding these arguments. How would we know if Alabama is better than Oklahoma State if they don’t get a chance to play each other? What about Stanford? They didn’t win the PAC-12 but they only have one loss, why can’t they play for the title?

The BCS has proven year after year that is not a good way of determining a national champion and this year its proven to be ineffective in providing college football fans with sensical match-ups for its other big time bowl games. It’s time to be rid this system once and for all.

I’ve had enough. I won’t watch the BCS title game or any other BCS game this year. I’m over this system that has shown itself to be unfair and plays favorites instead of awarding teams for their play.

All I can think about is five years and the possibility of a Michigan-OSU rematch. Those were the best teams in the nation and they should’ve played each other again but didn’t due to BCS hypocrisy. What’s changed that makes it ok for non conference champs who lost to the #1 team in the nation to now play for the national title?

Give me a break, matter of fact, give me a playoff because this system sucks.